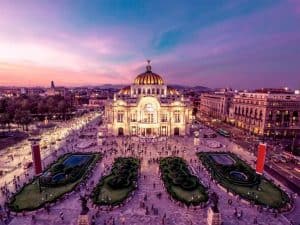 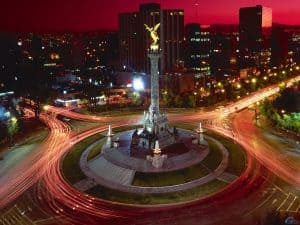 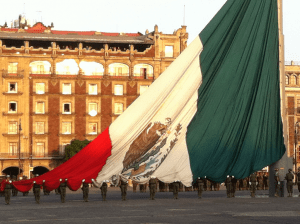 Known as the El Centro or The Historic Center, the tour focused on the central part of Mexico City. The Zócalo or main plaza, extends in all directions, with its farthest extent being west to the Alameda Central. The Zócalo is the largest plaza in Latin America and can hold up to nearly 100,000 people.

Mexico City was the capital city of the powerful Empire Azteca and was called Tenochtitan. The entire area was a religious and political complex of the Empire Azteca, with palaces, temples and even a zoo. When the Spaniards conquered the area, the Aztec world was destroyed and buried (500 years ago). It was not until the end of the 20th century that the exact location of the main pyramid was found. Known as the Templo Mayor, the building has been dismantled, but was able to be recovered with hundreds of archeological artifacts. Today you can traverse the space occupied by the original temple.

This section of the capital has just over nine square km and occupies 668 blocks. It contains 9,000 buildings, 1,550 of which have been declared of historical importance. Most of these historic buildings were constructed between the 16th and 20th centuries. It is divided into two zones for preservation purposes.